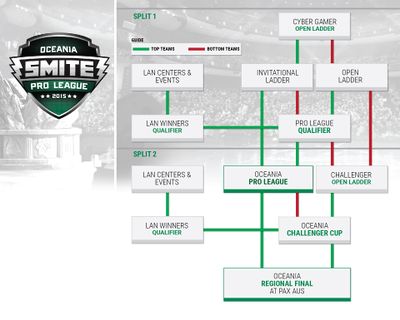 Split Two will mirror the structure of Split One, but the stakes are raised! Teams will be fighting to secure a spot in the Oceanic Regional Championship at PAX. Again, there are four ways to participate…

Restricted online ladder. The top teams from Split One will play against each other in an online ladder league in a fight to win direct placement into the Oceanic Regional Championship at PAX. Pro League will be between 8 and 16 teams. (Pending those who don’t make the cut will have to fight for their place against new teams in the Challenger Cup.)

Open online ladder. As in Split One, any teams can join this ladder up until roughly the mid way point. This will allow for new teams to form and evolve. Teams will play off in this series against other teams to climb to the top of the ladder. The best teams will gain entry into the Challengers Cup.

A series of tournaments at LAN events and LAN centers. A second run of LAN Event and Center tournament winners will first play off amongst themselves, with only the very best making it to face the Challengers Cup.